Behind the Scenes of Ultra Music Festival 2017 [Exclusive Interviews]

Behind the Scenes of Ultra Music Festival 2017 [Exclusive Interviews]

While we do love interviewing the artists and groups that make a music festival what it is, why does it solely have to be performers? During my three-day excursion on the festival grounds of bass, lighting, and booty shorts, I sparked a conversation with two figureheads and members of the Ultra family. I’m talking immediate family too; none of that fourth cousin deal.

I first met Joe Risolia on a yacht during the second day of Ultra Music Festival. It was starting to pour, I was missing the return of the legendary Sasha/Digweed, but to go out in that storm was flirting with disaster. I sat patiently checking AccuWeather. I spoke to the Ultra team and a few artists, keeping my pinky up while holding my drink.

A team member then introduced me to Mr. Joe Risolia, head of national sales for Ultra. Even though Joe is responsible for such a big event, he has an unassuming attitude; a real life of the party vibe. He was wearing a tie-dyed shirt and cargo shorts. All while covering his torso with a Blackwell Rum flag.

Joe’s aesthetic aside, the man is a “jack of all trades” with a rich history in Miami’s music scene.

“We were doing these warehouse parties around the beach called ‘Amoeba.’ My best friend [founder of Ultra] came to me asking if I would like to invest in a music festival. He wanted to expand the vision to a festival setting. I agreed to help raise money. The first year we were hoping for 1,000 people and we had 10,000 people show up.”

“Money was never important. Every year the festival would grow in attendance by 15% or 20% but Russell [executive producer] would lose money. It went to year eight and he was still losing money. I told Russell ‘why don’t we have our friends DJ or reduce the amount of lasers? I’ll run around with flashlights!’ Russell looked me in the eye and he said ‘Joe, I wouldn’t have named it Ultra if I was in it for money. The definition of Ultra is to go above and beyond.’ Thats our philosophy, it’s been a hell of a ride.”

Are you fan of electronic music?
Its grown on me, you know? I’m a fan of the old school [like Digweed and Sasha] and the new school as well. I’m a fan of blues and reggae. I worked with the Marley family and did a show called ‘Day In the Beach’ on 4/20 last year with the grandkids and the band InnerCircle.

Do you believe in luck?
There’s always a little bit of luck. Eventually if you have things out there, luck is going to hit you. If you don’t have your pole in the water, you wont catch fish. You have to put yourself in the way of luck.

Let’s discuss rum.
Yes! I’ve always been intrigued with Chris Blackwell, the owner of Island Records. He asked me if I wanted to help market the rum and I agreed. The recipe was partially produced in GoldenEye, a magical place in Jamaica. In one way or the other, Chris’s family has been in Jamaica since 1625. Asides from Island records and rum, Chris helped spur the renaissance of South Beach. In 2015, the city of South Beach gave him the key to the city for their 100th anniversary.

I sampled some of the Blackwell rum while Joe eagerly poured into my paper cup. Goes down smooth.

Did you see Ultra becoming what it is?
I did, I mean, I helped with the first international licensing for Ultra Puerto Rico and Brazil. But I have never seen a harder worker than our executive producer and my friend, Russell. He used to sleep in the office. It was amazing to watch him work. You know, I’ve been working this for twenty years and I’m still blown away by how big it has gone. Next year were doing our 20th anniversary. Expect a lot of new school stuff and a lot of old school sounds as well.

Fast forward 24 hours and I was in the cozy and bass-driven Biscayne Stage. Roman Nicolai was spinning techno behind the decks. I approached the quant visual production booth to spark a conversation with the VJ, Habs Akram. Habs was wearing all black, short spiked hair, and an almost coffee skin tone. He was focused on his computer, making sure every light and visual fell perfectly in line with the rhythm. I waved from afar, he gave me a quick smile and returned to monitor his computer program, Modul8.

I showed him the Facebook conversation we had about an interview and he quickly gave me a hearty handshake and a proper British smile and invited me behind the booth.

Habs is no stranger to the music scene or Ultra for that matter. He’s been working with Ultra for nearly a decade and has done video production from the main stage to the Carl Cox Megastructure to now his own little home on the Biscayne stage.

We chatted over the bombastic speakers, mainly yelling in each others ear.

“A VJ gives the artist identity. It’s amazing how one color changes the whole vibe, especially in the blues and R&B.”

Do you have a degree in graphic design?
No, I was self-taught. I started in small clubs around London and it built from there. I met Carl Cox back in 1998 during his crazy six hour sets. He asked me if I would do the visuals. After the show Carl said ‘you’re the guy I’ve been looking for.’

The two have been working together ever since. Habs shows me photos of him and Carl in classic cars driving around what I can only assume to be Ibiza. They’re two peas in a pod. Habs went on to work all over the globe, including eight years at the infamous Space Ibiza and has worked with the likes of Nine Inch Nails.

You seem to have a large social media following, how’d that come about?
The social media is for fun. I am personable. Every day I wake up with a smile. It’s all about the goodness! If you are good people, they will follow you. You have to find yourself in this industry.

Can you give some advice to people who want to pursue a career in this media?
Never ever forget your routes! I still have my old VHS tapes from VJing back in the ’90s. That’s how it used to be done, you know? On VHS tapes! No matter how successful you are, I’m the same person. Respect everyone and they will respect you and you will be successful from it. Make it happen! There are always people who wondered why they f—d up. It’s because they didn’t make it happen. And you’re only as good as your last gig.

Habs and I cheered soon after and hugged it out. He promised me that if I’m back next year, he will bring me a mini-controller and we will jam together. “I always keep my word” as he smiled and smoked a cigarette. This man has energy to spare! Habs is not just a faceless person on the crew. He brings a certain charisma wherever he goes; one that makes it impossible to not have a beer with him. His phrase “its all about the goodness” is one to keep close to you. Stay humble, but make it happen. “Oh yes, oh yes.” 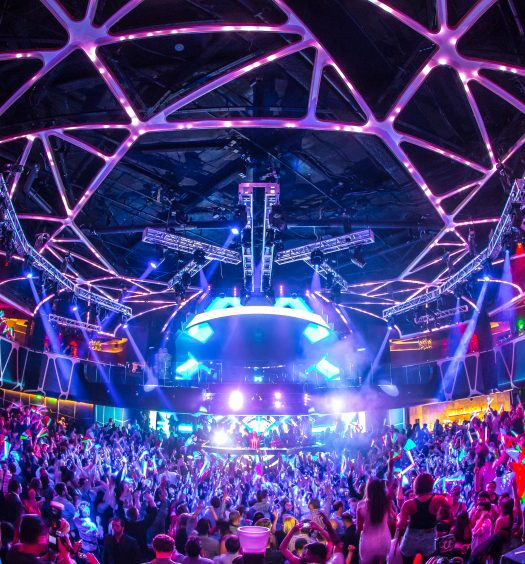 This Group Has a Very High Spot on the Coachella Bill and Twitter Is Confus...